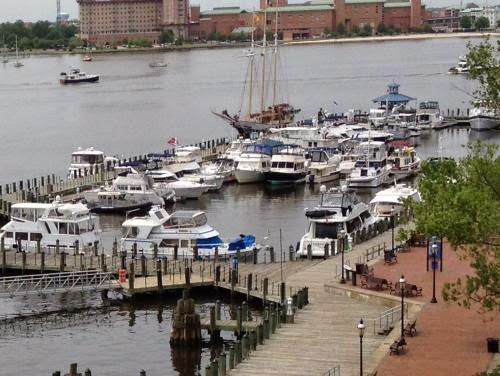 We had a great time in Norfolk at the AGLCA rendezvous.  There were some fifty looper boats there at the marina and many more who drove or flew to attend the conference.  Besides the rendezvous Jan and I rented a car to do some errands and take Chloe in for her grooming.  We also had the AC on the boat repaired and both props pulled and fixed.  One of the surprises was Cindy and Dennis, from our yacht club in Lodi, flew in and attended the rendezvous.  They have plans to start their loop sometime next year.  It was great spending time with them and maybe we'll see them at the end of the year when we finish.  The next rendezvous is on the Tennessee River at Joe Wheeler State Park in October. Hopefully that's where we'll be at that time.  After being in Norfolk for six days we were ready to move on.   One of the marinas in Deltaville is having a rendezvous after the rendezvous so that's where we are going next.