We left Grafton around 8:00 am on Wednesday, 9/17 with three other boats.  After traveling about fifteen miles we came to the Melvin Price Lock.  The locks on these rivers are huge.  We locked through with no problem and were speeding down the Mississippi with a 4 to 5 knot current and tons of wood debris, sometimes including whole trees.  We arrived at our first and only stop that has a dock and power, called Hoppies.  The docks are actually four or five barges tied together.  Hoppies is owned by Hoppie himself and his wife, Fern.  Hoppie just had his 78th birthday and Fern pretty much runs the place.  Every day Fern gives a 4:30 pm informational get together about anchorages, areas to be careful, and any other topics about the river.  We did learn quite a bit and I took several notes.  The Mississippi River is nothing to take lightly.  I have never been on a river with so much force, muddy water, and not to mention the wing dams, chevron dams, and missing channel markers wiped out because of the flood stage and debris.  The other thing is it at times looks like it's boiling with whirlpools.  I've never seen anything like it before.   Mark Twain said, "The Mississippi River is too thick to drink and too thin to plough".  The next three stops will be anchorages and one lock wall we can tie up to for the night.  We left Hoppie's the next day around 10:00 for an easy day to the Kaskaskia River Lock wall.  Only us and Attitude Changer spent the night at the wall.  A couple other boats came in later but they weren't loopers.  Left the next morning for our next anchorage at diversion channel which is a small cut off the Mississippi.  Attitude Changer side tied to us and we had four other looper boats come in a few hours later; Navigator, Average Looper, Serinity, and Summerland.  Everyone came over to our boat and the drink served was Dirty Pirates.  After everyone left we had a nice peaceful night.  Next morning all six boats left for the Ohio River.  Everyone was excited to get off the Mississippi and be on the Ohio.   Once we turned on to the Ohio the water was clean and we were going against the current.  The anchorage, recommended by Fern, was right on the Ohio River but off the channel.  We rocked a little when a tow went by but it was good holding and close to the shore to take Chloe by dinghy.  We all left at 7:00 am the next morning, 9/21, for a very long day of 70 miles and two locks to go through.  All I can say is it was a real challenge, because before we arrived at the anchorage on the Ohio, my lower helm steering seals blew and hydraulic fluid was all over and I had to steer the boat with the throttles.   If you have been following our blog you probably remember this happened on the upper helm while in Canada.  Luckily I learned from that and had an extra seal kit in stock.  So I used the throttles all 70 miles to steer to our destination of Green Turtle Bay.  There are two ways you can go, one is the Tennessee River and the other is 20 miles more on the Cumberland River.  When we called the lock at the Tennessee they said we could be there for several hours before we could go through so we all decided to go the Cumberland.  The Cumberland was a small river and basically no barge traffic.  After eleven hours we all finally got here at Green Turtle Bay in Grand Rivers, KY.  YEAH!!!!!

Posted by Larry Dezonia at 4:04 PM No comments:

Because of the high water and debris on the Mississippi we stayed here in Grafton for more than we had originally planned.  So while we're here with about 38 other looper boats we stocked up on groceries, and supplies to last us for a while.  Once we start down the Mississippi, Ohio, and Cumberland River there is no place to stay with any power except for a place called Hoppies which will be our first stop.  The marina here is very nice with a restaurant, swimming pool, covered slips, and a courtesy car for running around.  It will take us four days to get to Green Turtle Bay Marina on Barkley Lake in Kentucky.  We should be leaving on Wednesday, 9/17 and get there on Sunday the 21st.  We will not have Wifi or little cell service the until then.

Posted by Larry Dezonia at 3:49 PM No comments:

Tuesday morning, 9/9 Attitude Changer and us left at 7:30 am for Peoria.  It had rained that night and many of the looper boats decided not to go until the next day.  Little did they know the next day the weather was much worse.  We got thru the lock with no problem and made it to Peoria at the Illinois Valley Yacht Club for a two day stay because the weather didn't look good.  We had over three inches of rain that night and thru Wednesday.  We left Thursday morning with Attitude Changer.  The river had risen and there was a lot of debris in the river.  There are no marinas between Peoria and Grafton which means we had to anchor out for the night.  We traveled about 80 miles but had a great current that pushed us about 10 knots per hour the whole way.  We anchored at a spot called Bar Island.  After we anchored we launched the dinghy and went over to Attitude Changer for ice cream and the fix in's.  Early in the morning I took Chloe on the dinghy to shore to do her thing and after loading up the dinghy we took off around seven.  Another 80 mile day but with the current we were flying.  We finally arrived in Grafton after dodging tons of debris in the river around 3:30 pm.  There were all ready some 25 looper boats here waiting for the go signal to go down he Mississippi River because of the large amount of debris and high water.  So I guess we'll just wait like everyone else.  The good news is Navigator and Average Looper are here and invited us over Friday night with Attitude Changer for Tortilla soup and the fix in's.  We brought over some salmon.  From what I know there are now 38 looper boats here and maybe as many in Alton, about 10 miles down stream and more across the river in Saint Charles.  Soon as conditions improve look out because here we come!  As a side note here at the Grafton Harbor Marina they have a pool, courtesy car, great store, and the Big Kahuna restaurant.  Not a bad place to be for awhile. 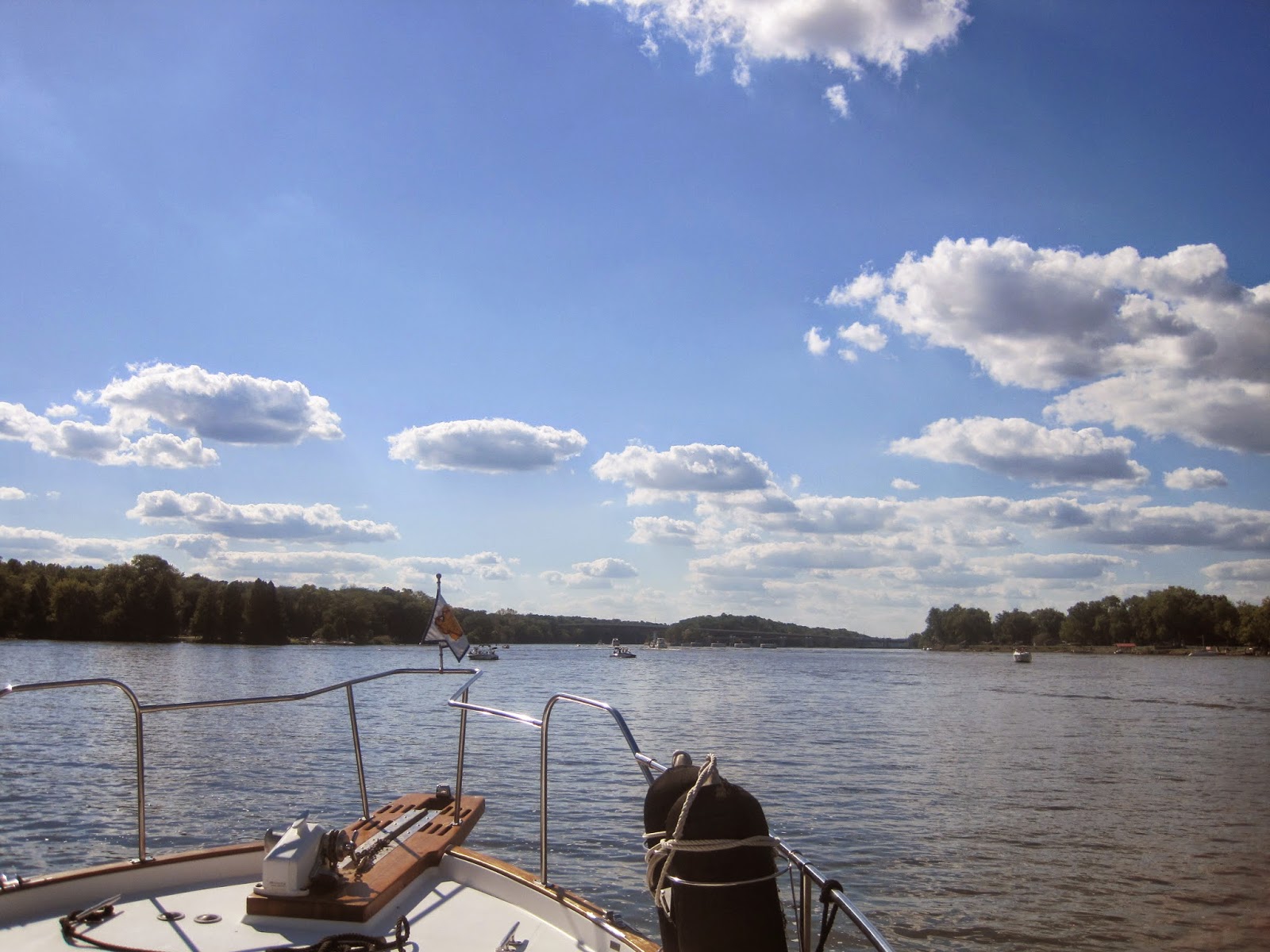 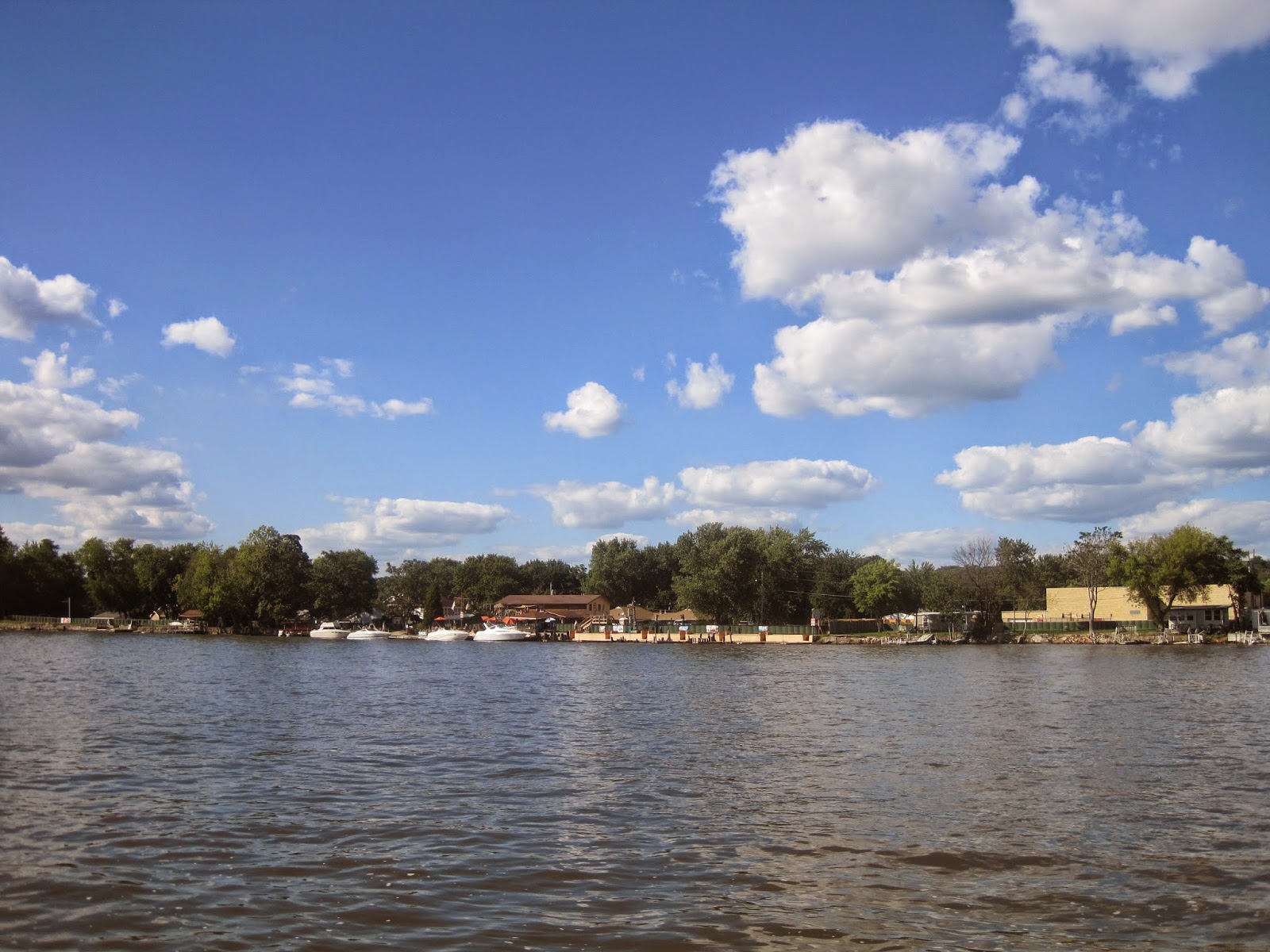 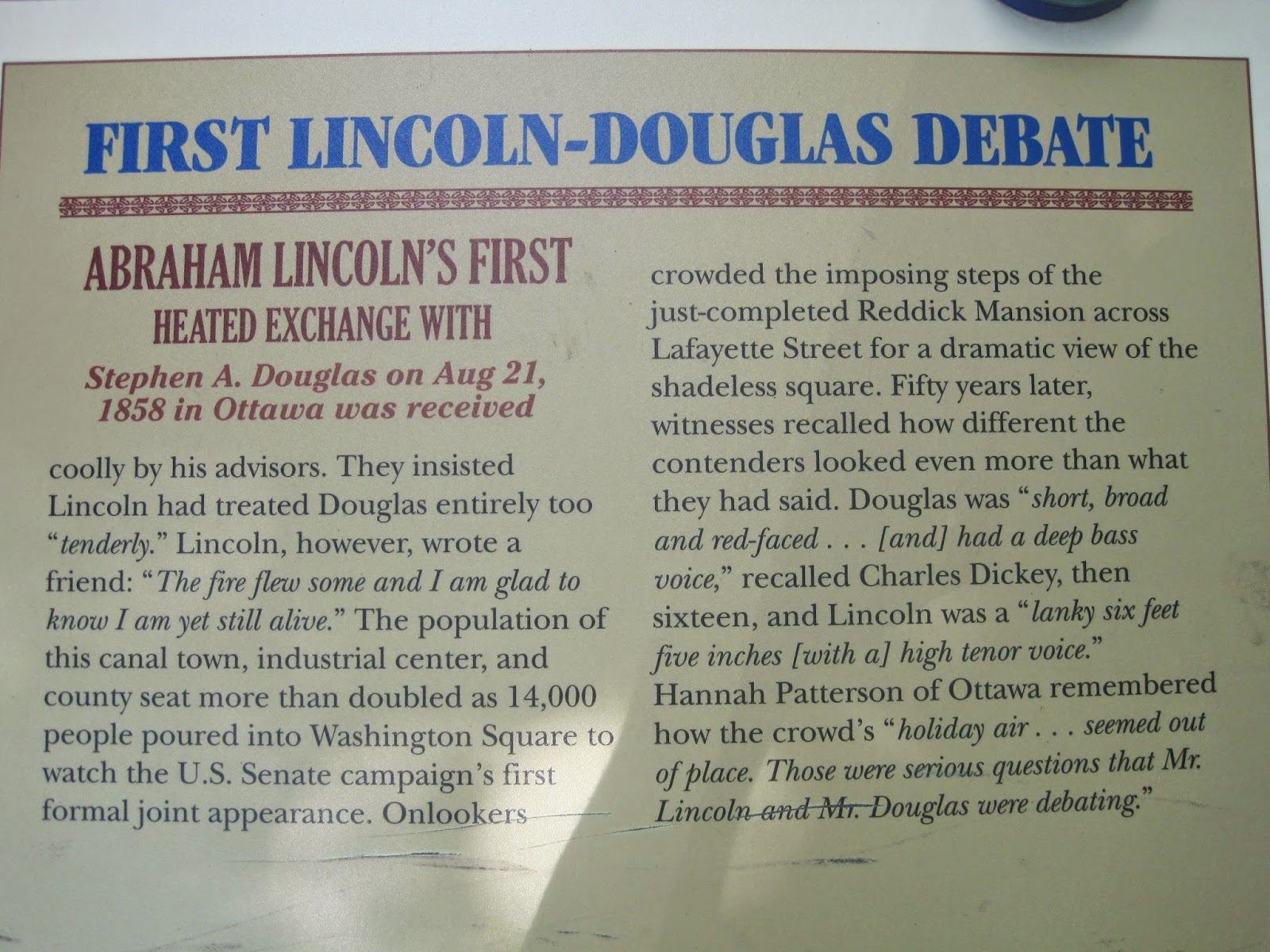 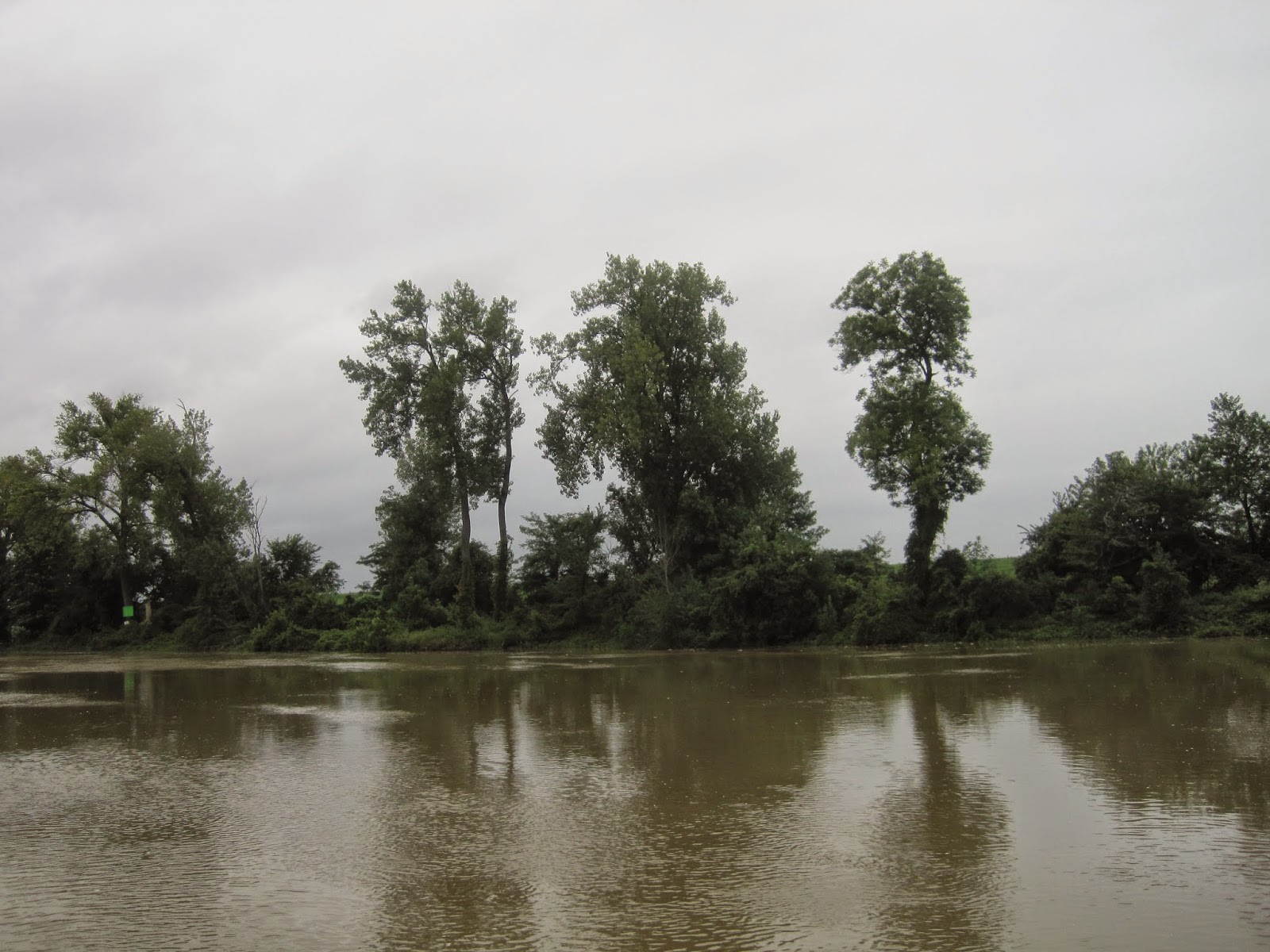 Posted by Larry Dezonia at 4:44 PM No comments:

Chicago to Joliet and Ottawa Illoinois


Sunday, 9/7/14, Angela and Dave met us at the boat around 7:30 am and we headed out for our trip to Joliet.  The first thing you do is go thru the Chicago Lock and that puts you on the Chicago River going down the middle of downtown Chicago.  One of the requirements to go down the river is you can not be any higher than 17 1/2 feet.  We are 16 feet so it we made it with no problem.  It is a real trip taking your boat down the middle of Chicago.  We also had Dane and Angela with us who did a architicure tour for us of the various buildings.  Once you get out of the downtown area it starts to turn more industrial and then more and more commercial barge traffic.  One area we had to go thru was the electric field in the river to keep the invasive specifies, Asian Carp, out of Lake Michigan.  These fish jump out of the water as you go by and can be hazardous if you are in an open small boat.  We were making great time for our destination of Joliet when we finally reached our second lock called the Lockport Lock and saw several looper boats tied up to the wall waiting for their turn.  We tied up with them and ended up wiring for five and a half hours before we could go through.  Remember, commercial traffic has priority.  We finally arrived in Joliet at 6:30 pm and met up with Attitude Changer and with all the boats we were with from the lock, filled up the wall in Joliet.  We went over to Harrah's Casino across the river and ate at the buffet.  After dinner we said our goodbyes to our friends form Chicago, Angela and Dane, who walked over to the train station a couple of blocks away to head back home.  Next morning at 6:15 am we were awakened to knocking on our door to find out if we didn't leave in the next 15 minutes if we leave now we wouldn't be able to lock through at the next lock for at least a couple of more hours later.  So we rushed off and made it in time, only problem the second lock we came to we waited for three and half hours.  We anchored out while waiting and Attitude Changer side tied to us.  We arrived in Ottawa around 4:30 and stayed for a couple of days.  We stayed at Heritage Marina that had a courtesy car we took advantage of to do our laundry, have lunch and do some sight seeing. 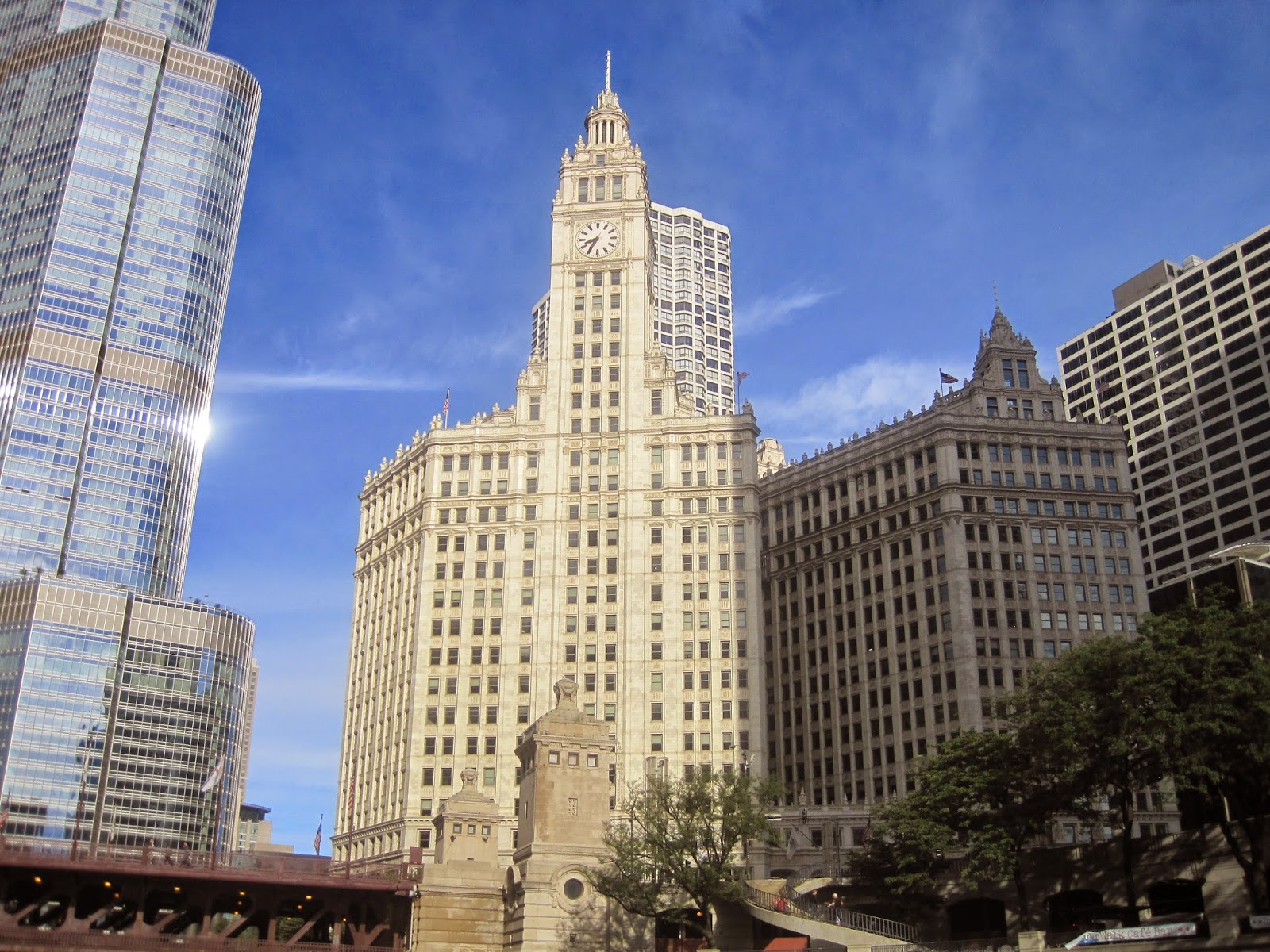 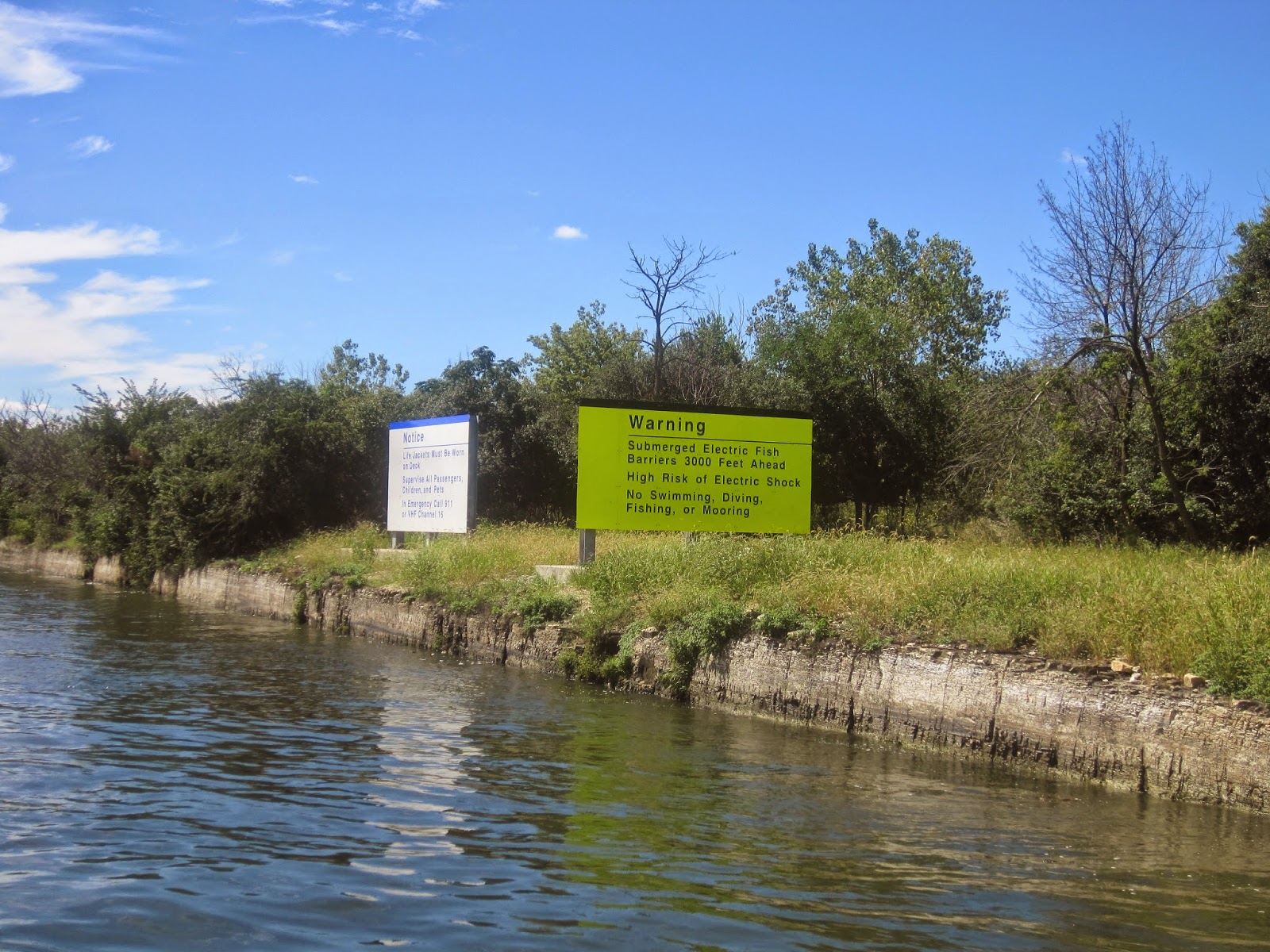 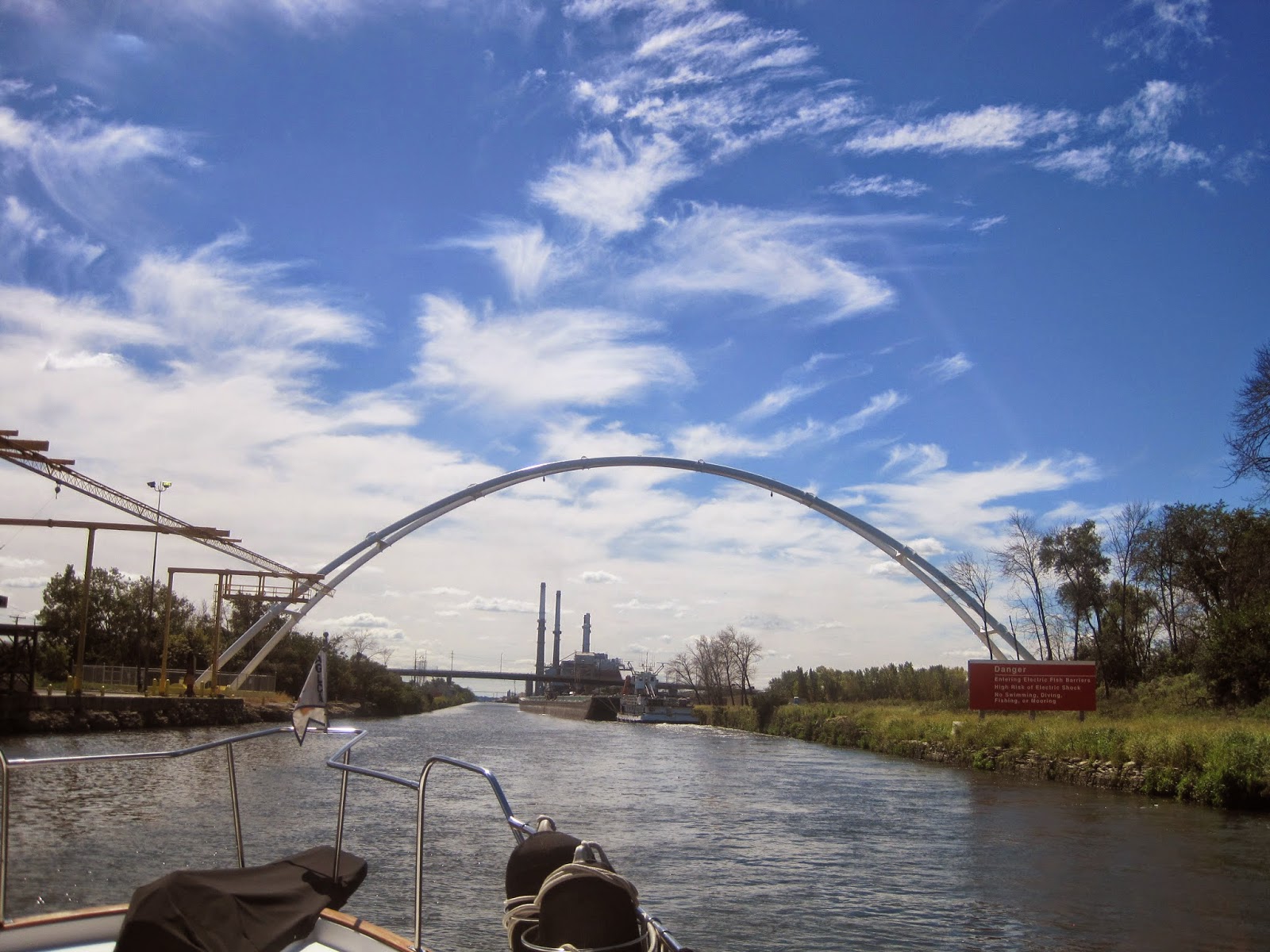 Posted by Larry Dezonia at 8:43 PM No comments:

We arrived at the downtown DuSable Marina on 8/31/14 on Sunday of Labor Day weekend.  It was an awesome sight of the Chicago skyline and there were many boats enjoying the long weekend.  We pulled in and decided to go to the Navy Pier and have lunch. Navy Pier is a big tourist trap to visit with many shops and restaurants.  Turns out this was a bad decision as the dense crowds made walking difficult so you can imagine how many people were waiting for tables in restaurants!
The next day we reconnected with Dane and Angela whom we haven't seen since we met five years ago in Washington State.  We originally met them at a hotel we were staying at the night before we took our Alaska cruise with Debbie & Mike, Bruce & Marcia, and Dreama & LeRoy.  We have kept in touch with them through Facebook.  They looked wonderful and are expecting their first child next month.   They took us to the grocery store, Best Buy, and let us come to their home to meet their dogs, Wrigley and Max, do our laundry, AND treated us to dinner.  Again, thanks so much Dane & Angela.
Tuesday morning, 9/2, we were able to reconnect with our looper friends Barb & Ross on Attitude Changer.  We hadn't seen them for 2-1/2 months as we went the route of Lake Champlain and they took the Erie Canal route when we all went into Canada. It was so good to see them.  Later that day our friends David & Susan flew in from California to visit for four days.  We had a wonderful time visiting and touring Chicago with them.  Wednesday we all went on a double decker bus to tour downtown Chicago and ate at Ed Debevic's, a restaurant atmosphere much like Dicks Last Resort in San Diego.  Next day David, Susan, Jan and I went on a entertaining "gangster" tour.  It was fun to hear all about the early mobsters, including Al Capone.  We topped off the afternoon with visiting the 96th floor of the Hancock  Building, had adult beverages, and enjoyed the view.
Sunday, 9/7, Dane and Angela joined us again to say goodbye to Lake Michigan and Chicago as we begin heading south, cruising the river system. 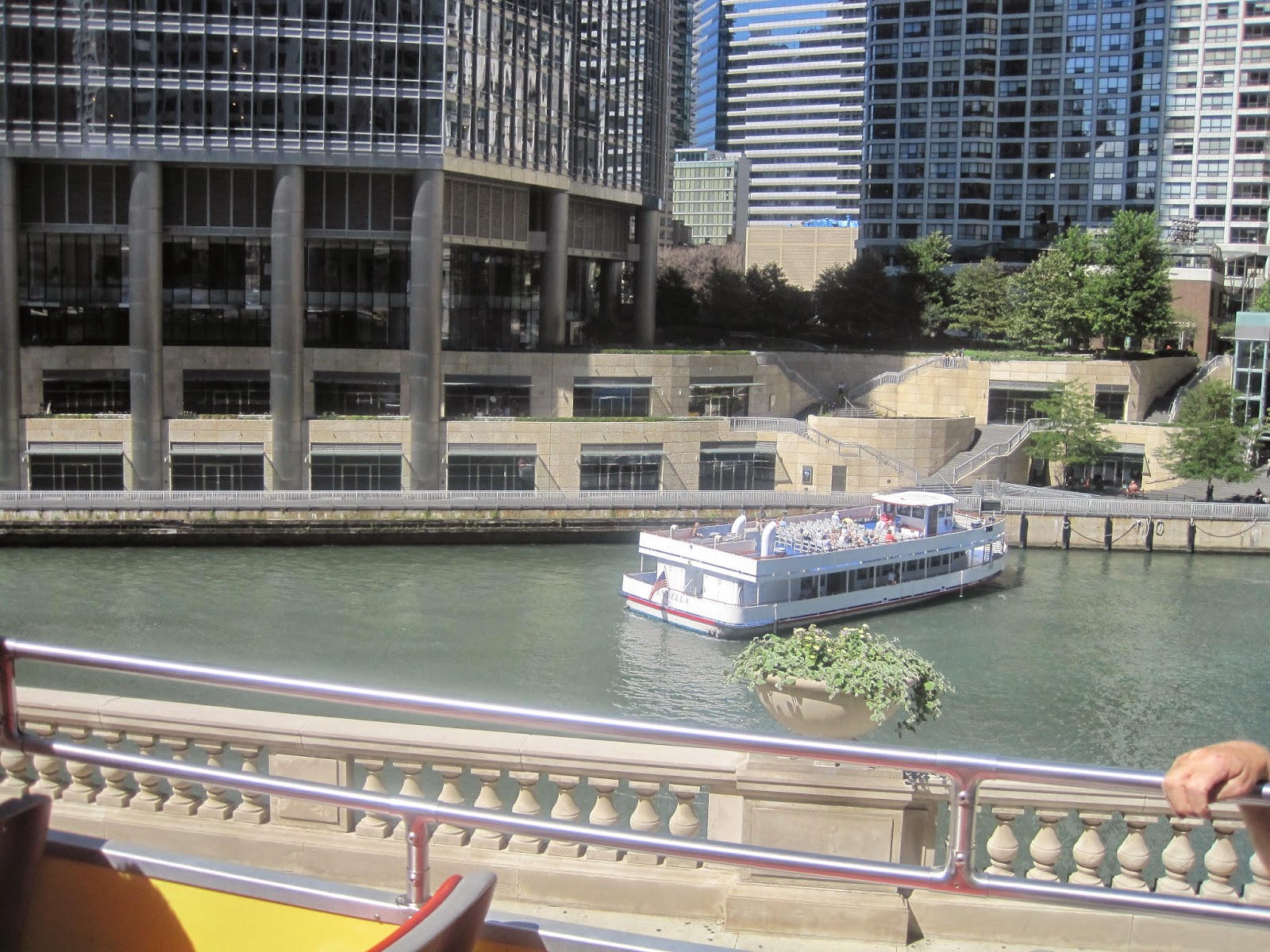 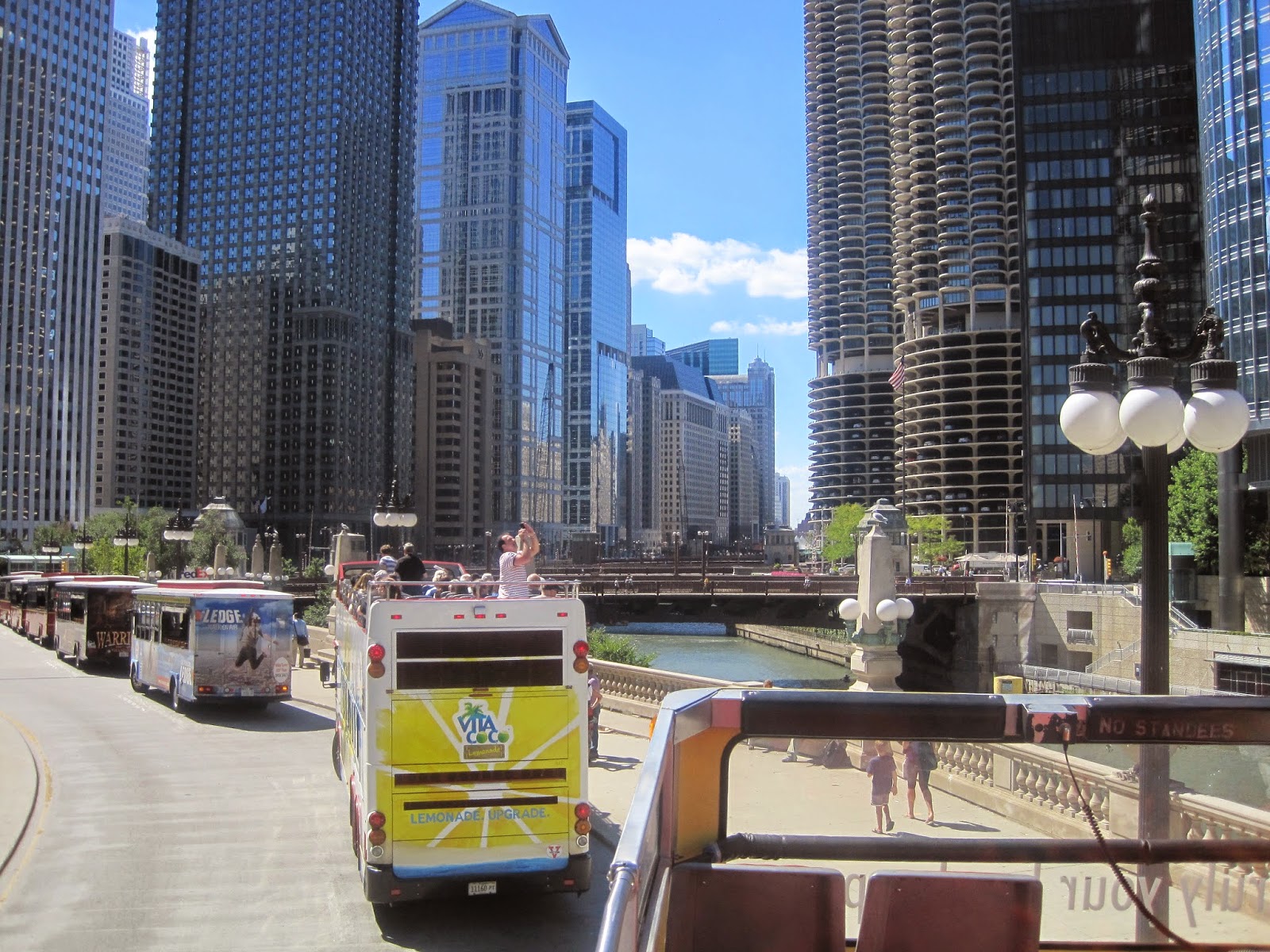 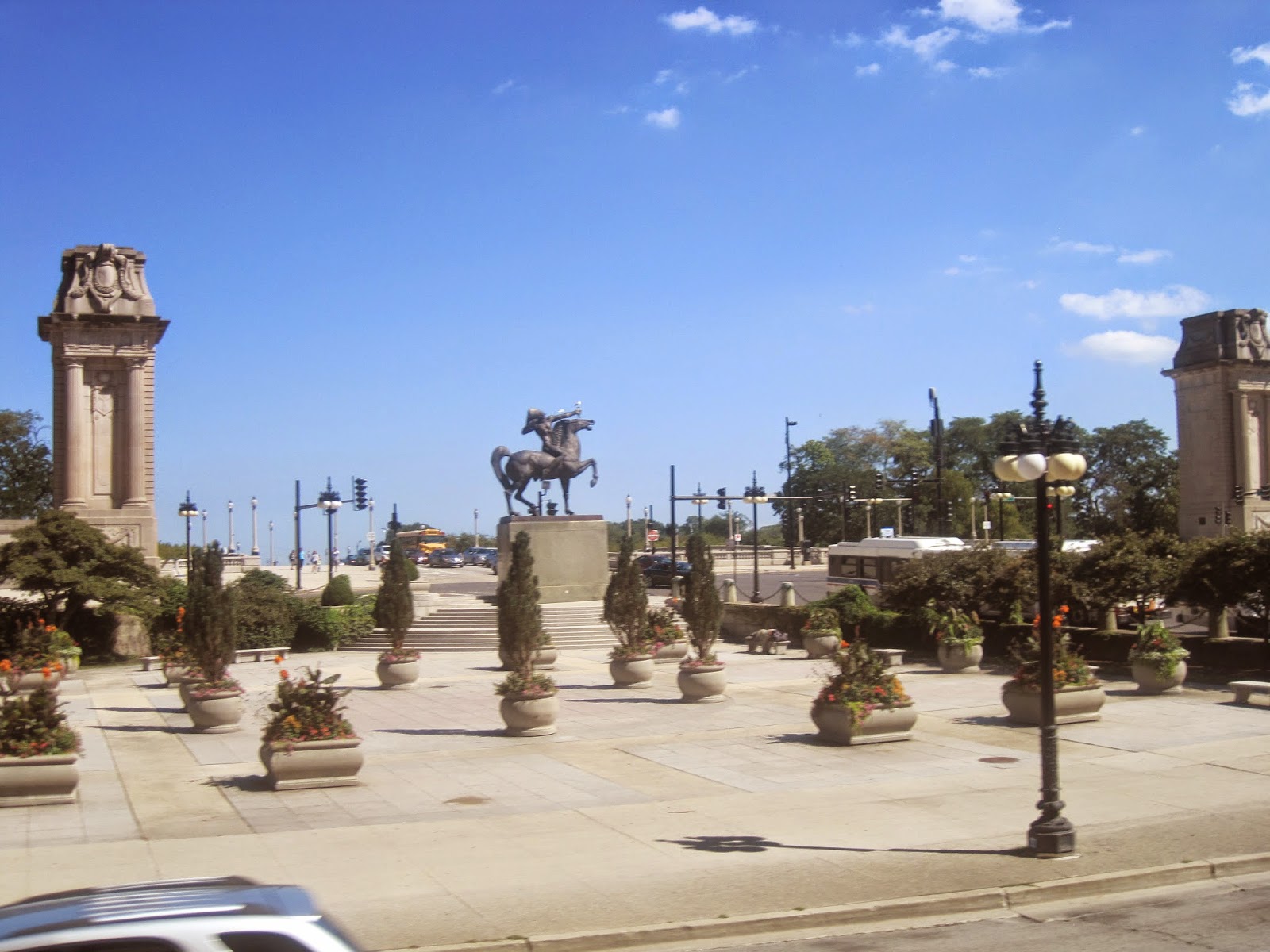 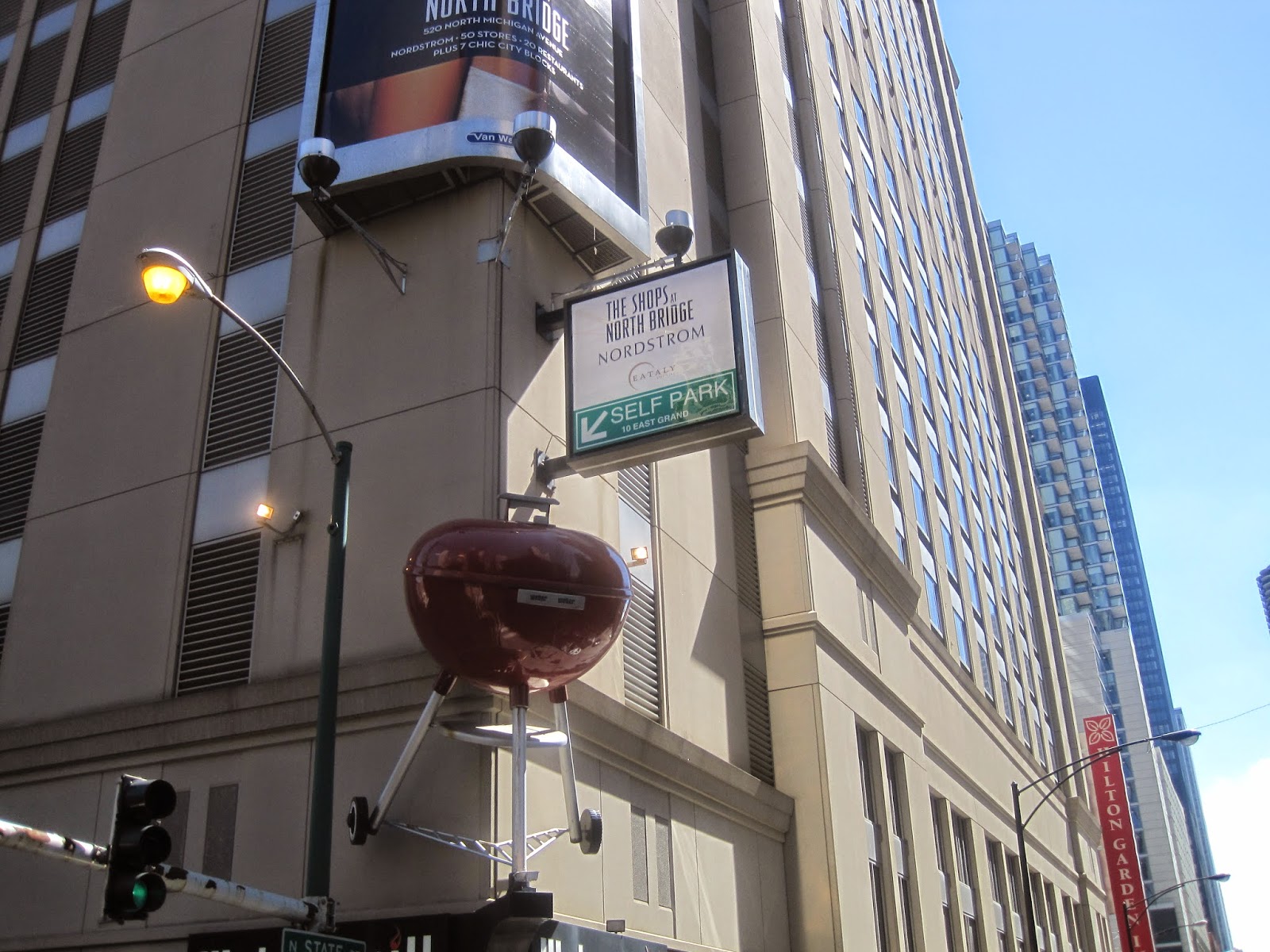 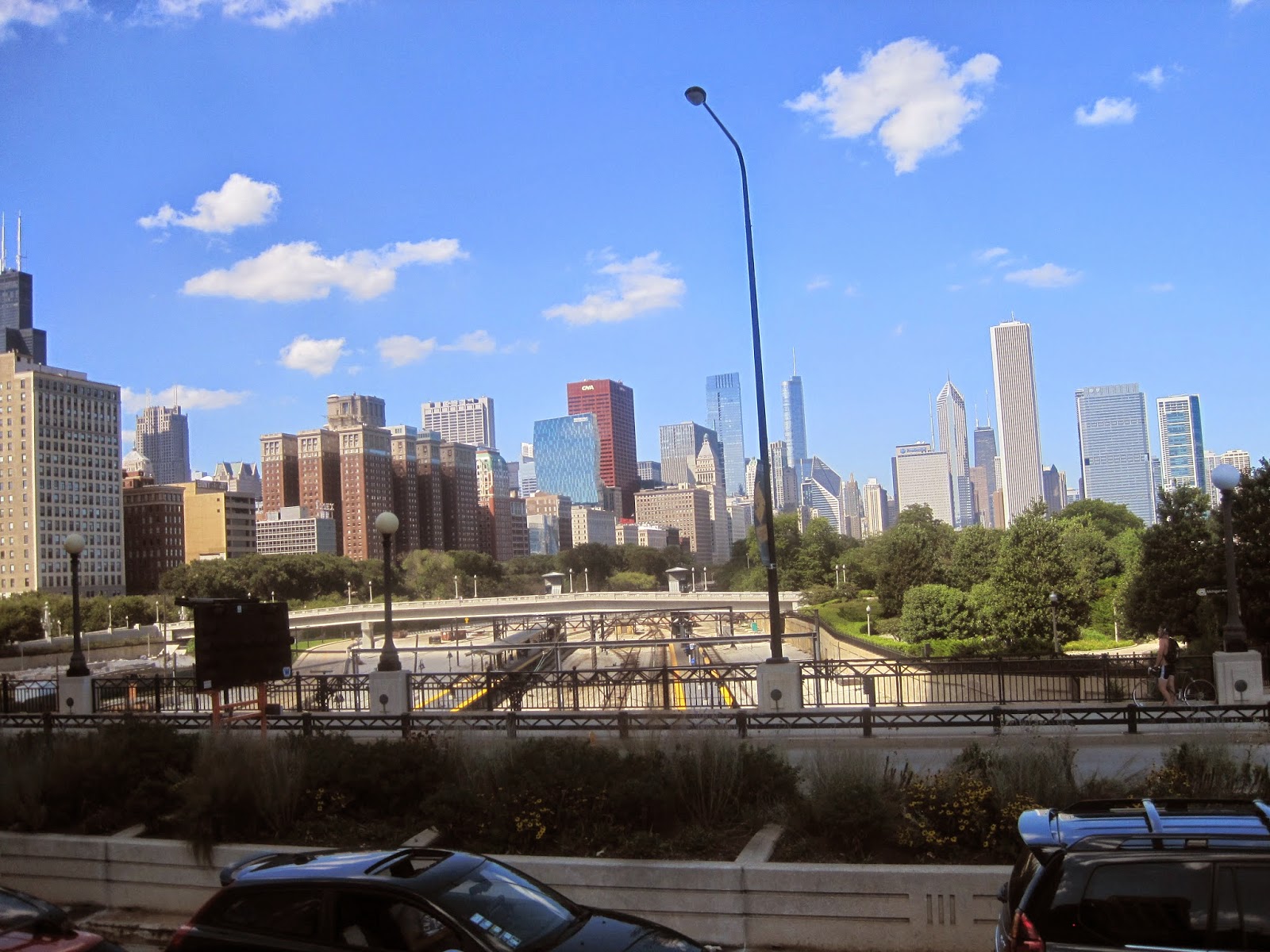 Posted by Larry Dezonia at 12:40 PM No comments: