We were under the gate around 6:30am and in a whirlpool of churning ocean.  The Captain was about to turn around but the Admiral said to suck it up, so I put the pedal to the metal and found out it was a lot smoother than going trawler speed.    After about an hour the seas calmed down with about a 4 to 5 foot swell with a long interval, very comfortable.  I ran the boat at 2200 RPM for most of the trip and with the following sea would do about 14 knots down hill.  Then the sun came out and no wind, what more could you hope for?  We arrived in Monterey about 3:30pm. and were assigned a slip in the back corner of the marina with sea lions lying all over the docks and making there usual loud barking noise.  Chloe went crazy and had to bark back.   Speaking of Chloe, we gave her a vet prescribed motion sickness pill which helped her from the constant shaking and panting.  She even laid down after several hours of standing.  When we checked in with the harbor master we begged for a different slip.  He said we could go to the end tie on the other side of the marina after a sail boat leaves at 5:30pm.  If anyone is familiar with the fisherman's wharf, we are right there next to the wharf.  The weather looks bad for at least four days so we decided to rent a car for a couple of days and take Chloe in for grooming, run some errands, and give Jan a chance to go to Carmel. 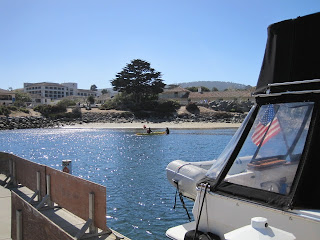 Posted by Larry Dezonia at 3:57 PM