The Skinny Behind the Indian Holding the Fish 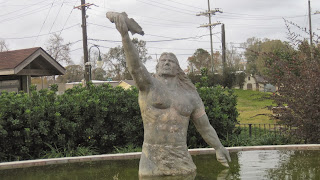 Since we stayed an extra day in Houma, LA because of weather we had to pay the guy who comes over from his house to collect the money for the City for an extra day.  I had to ask him what the story was behind the Indian.  The story is that it was created by one of the local artists and was installed at the Memorial Park, down from from where we are at the city docks.  He said there was a small minority (as usual) that complained about the Indians bulge.  So they had the artist shave it down, but that wasn't good enough and they still complained.  So, when they built the city docks, where we are, they moved the Indian from the park and put him in a pool of water to hide his bulge.  Oh by the way, he used to have a spear in the lower hand but someone stole that the first week and then later broke off the tail of the fish and that's the story.
Posted by Larry Dezonia at 3:25 PM