We had a long 79 mile run to the Shell Morgan Landing to tie up for the night and then a 56 mile run to Morgan City.  We left Lake Charles in the dark in the early morning with fog.  I sure love my new radar and GPS plotter.  The fog lifted about 9am and and the rest was sit back and take in the scenery.   Soon after we left we went thru our first lock called the Calcasieu Lock.  Basically you drive right thru without stopping. When we passed one of the barges he called us on the radio and said it looks like our dingy was flopping around on the back of the boat.  Jan took the wheel and I went to investigate.  Sure enough the dingy was hanging off the davit on the back.  I had Jan slow down to an idle while I jury rigged a come along to the back of the boat so I could lift it back on to the davit.  What fun!  Our second lock we went thru was called the Leland Bowman Lock.  Another drive thru.  When we got to Shell Moran Landing it was a corrugated steel wall about four feet off the water that can accommodate only a couple of boats. Since we are the only crazy people boating in the winter we had no problem getting a place to stay. We got to listen to the work boat in front of us with his generator running all night and then all the work boats leaving at "O" dark thirty to take the workers to oil platforms throughout the Bayou.   We didn't take pics of this place, I guess we were just too tired and forgot.  In the morning we filled up with fuel at $3.32 per gallon and headed to Morgan City.  We went through our third lock the Bayou Boeuf Lock.  Another drive thru.  We had heard both good and bad about the wall you have to tie up to and weren't sure if we were anxious to find out for ourselves.  Yes, the wall was rustic but we managed to make it through the night without incident except for the occasional rolling from passing boats.  We wish we could have spent more time in some of the cities we stop at, but we really want to get to New Orleans before Christmas.  The main reason we try to tie up is for the power and to let Chloe off to do her duty.  The scenery between Morgan City and Houma was the best so far because of the trees with the moss hanging off.   Not sure if we are going to head to New Orleans tomorrow because of weather but the next day looks good.  We are at nice place here in Houma at the city docks and took a little walk to the bank and store at the Shell station.  If we have to stay here for another day it's not too bad. 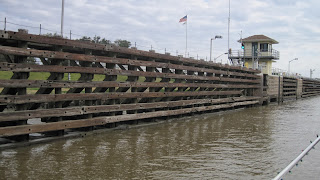 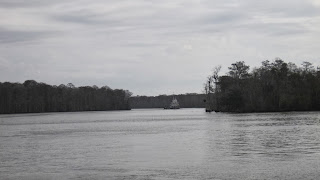 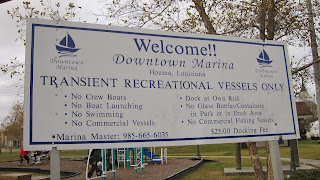 Posted by Larry Dezonia at 3:56 PM